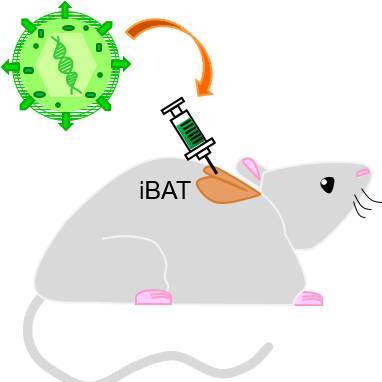 Primary conclusion: Eight mice were analyzed in this study, each with a different viral incubation time (date of injection - date of euthanasia). We verified strong AAV6 retrograde labeling in the postganglionic neurons (sympathetic chain ganglia). However, viral labeling from rabies injection did not display a convincing signal in the pre- or postganglionic neurons. Animal 6 - iDISCO was done for this animal, but the background labeling is very heavy and no clear conclusion on the labeling in sympathetic ganglia and IML can be decided. Image data for this animal is not included in the dataset.

Experimental Design: The retrograde viral tracers were injected into the interscapular brown adipose tissue (iBAT) to label the axons that innervate iBAT, which have cell bodies in the sympathetic chain ganglia (SChG). Each mouse used in this study was injected with pseudorabies virus (PRV) and allowed different incubation times. After euthanasia, the peritoneal cavity was eviscerated to reveal the SChG. A stereomicroscope was used to visually confirm the extent of viral labeling within the chain ganglia. After the procedure, the samples were trimmed to only include the SChG and spinal column. Then, the iDISCO technique was performed in order to capture high-resolution images of the SChG and relevant structures via light-sheet microscopy.

Completeness: This dataset is a part of a larger study: Genetically-based neuro-modulation of adipose tissue functions.

Important notes: This dataset is currently undergoing image registration and will be updated once this process is complete.