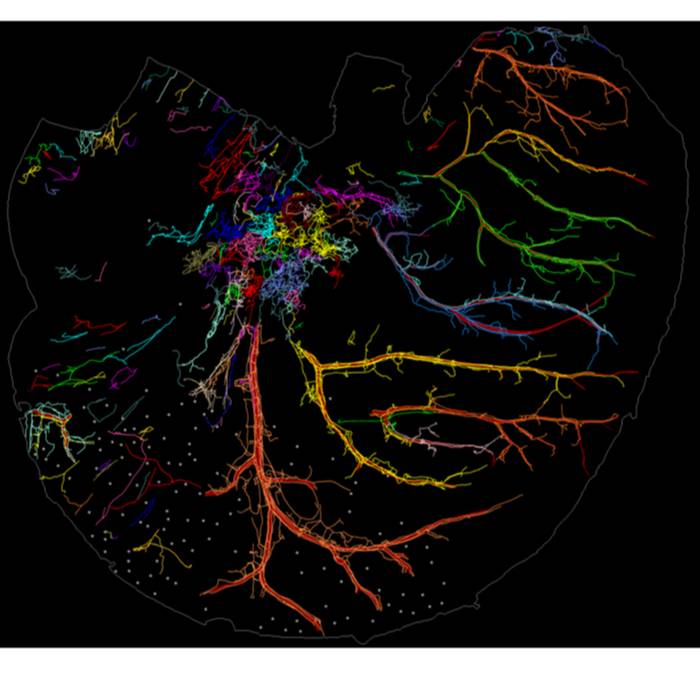 Study Purpose: Nociceptive afferents innervate the stomach and send nociceptive signals centrally to the brain and locally to the enteric nervous system. Nociceptive afferents can be detected with a variety of different markers (e.g., CGRP, SP, TRPV1). However, the distribution and morphological structure of nociceptive axons and terminals have not yet been well determined in the flat-mounts of the whole stomach. In this study, we used calcitonin gene-related peptide (CGRP) as a marker to label nociceptive afferent axons and terminals in the in the flat mounts of the whole ventral and dorsal stomachs of mouse. This is the first time that we provided a topographical map of CGRP-IR innervation of the whole stomach at single cell/axon resolution. The work provides an anatomical foundation for functional studies of CGRP-IR axons in various regions of the stomach and their remodeling in diseases.

Data Collection: We applied a combination of state-of-the-art techniques, including confocal microscopy, Zeiss Imager microscopy, flat-mount tissue processing of the whole organ and immunohistochemistry, Neurolucida 360 tracing and integration of the tracing data into a 3D stomach scaffold to determine the distribution and morphology of CGRP-IR axons and terminals in the whole stomach. The animal model we used was C57BL/6J mouse. This dataset contains 2 components: 1) Montages of CGRP-IR axons and terminals in 7 male mouse stomachs (sub-dorsal-1, sub-dorsal-2,sub-dorsal-3, sub-dorsal-4, sub-ventral-1, sub-ventral-2, sub-ventral-3). The montage is a maximum projection image that is stitched from several hundreds of confocal single section images and is saved as .tif, .jpg, or .png. 2) The image corresponding to the stomach is digitized and traced using Neurolucida 360 and is saved as XML files.

Experimental Design: Animals were euthanized with a lethal dose of sodium phenobarbital then perfused with at least 150 mL 40 °C phosphate-buffered saline via a blunt 18-ga needle inserted to the left ventricle, and blood was drained by cutting the inferior vena cava. The perfusion solution was switched to 150 mL ice-cold Zamboni’s fixative (15% picric acid, 2% paraformaldehyde in PBS, pH = 7.4) to fix the tissue. After the perfusion, the stomach was removed from the visceral cavity and trimmed to include the distal lower esophageal sphincter and the proximal pylorus. The stomach was post-fixed in the same fixative for 8 hours. After post-fixation, each part of the stomach was cleaned, and the mucosal and submucosal layer were dissected from the muscular wall of the stomach. The myenteric plexus together with the longitudinal muscle layer (facing the serosa of the stomach) and circular muscle layer (facing the submucosal layer) comprise the stomach muscular wall. The whole mount muscular wall of the stomach was processed with CGRP antibody (RRID:AB_1658411).