Microstructural analysis of food intake as a behavioral endpoint to determine the effect of chronic gastric electrical stimulation on the consumption of a high fat diet by adult male Sprague-Dawley rats. 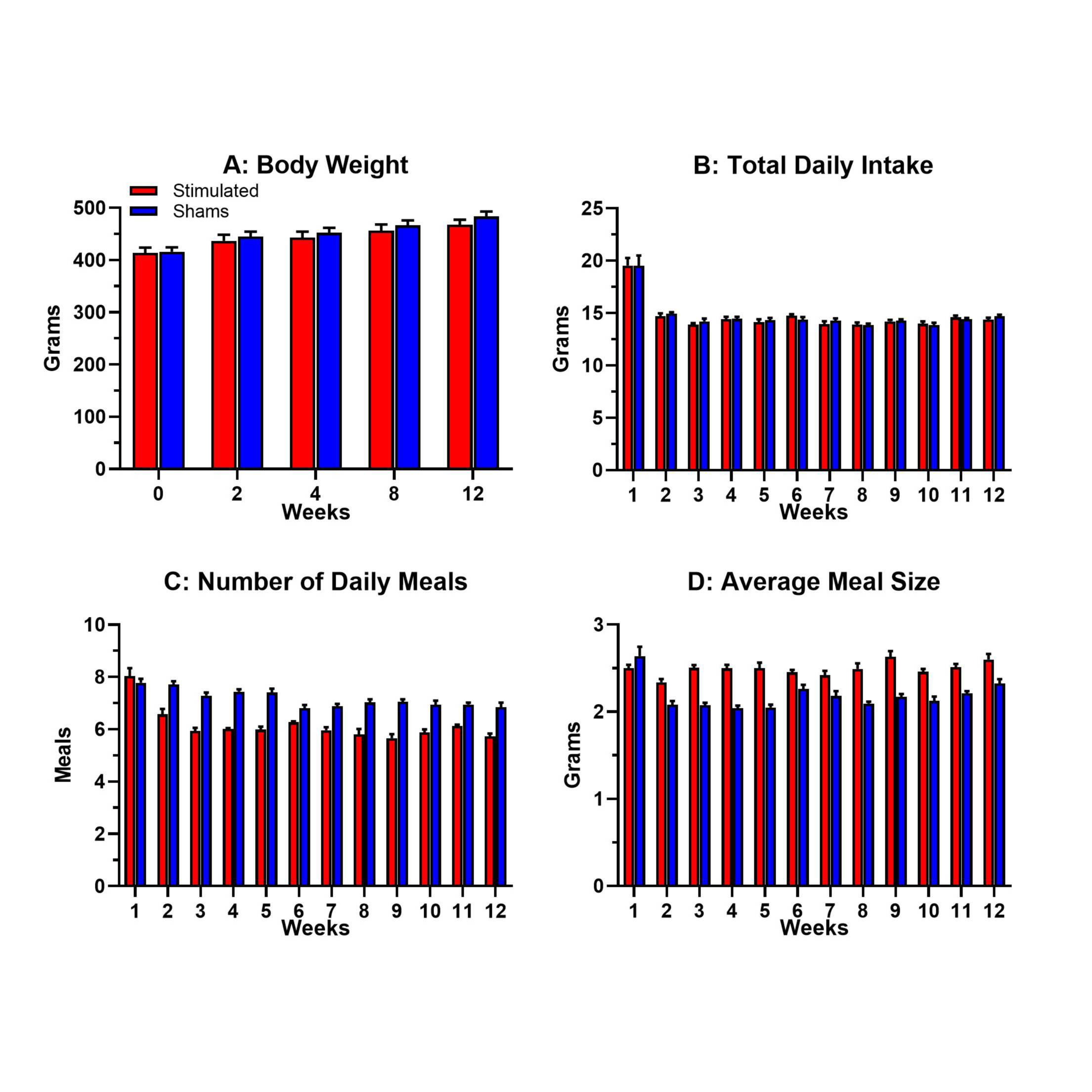 Study Purpose: Gastric electrical stimulation (GES) has been relatively unsuccessful at altering the feeding pattern and bodyweight of healthy adult male Sprague-Dawley rats maintained on a chow diet. We hypothesized that this ineffectiveness is due to the inherent difficulties in shifting healthy rats out of homeostatic balance. Thus, we paired GES with the presentation of a high-fat diet challenge, which is known to result in obesity, and evaluated the onset and development of changes in feeding patterns and body weight as rats fall out of homeostatic balance.

Data Collection: Microstructural analysis of food intake as a behavioral endpoint to determine the effect of chronic gastric electrical stimulation on the consumption of a high-fat diet by adult male Sprague-Dawley rats.

Primary Conclusion:Stimulated and unstimulated sham male rats did not differ in body weight or total daily intake throughout the entire 12 wk study. However, by week two of the study, the stimulated rats consistently ate fewer meals that were larger in size compared to the unstimulated male shams. Mean body fat content and blood glucose levels did not differ between the two groups at the end of the study.

Experimental Design: Twenty-two healthy adult male Sprague-Dawley rats were implanted with patch electrodes at a location on the forestomach wall known to contain a high density of vagal afferent terminals thought to play a role in the monitoring of gastric compliance and gastric motility. Eleven rats were continuously stimulated for 12 wks using a pulse parameter known to increase the number of gastric contractions (0.6mA, 0.2ms, 5Hz, 20s On:40s Off) while the remaining 11 rats served as unstimulated shams. The onset of stimulation coincided with the transition to a 45% high-fat diet (Research Diets, D12451). The feeding behavior of individually housed rats was continuously monitored throughout the duration of the study using the BioDAQ automated intake monitoring system from Research Diets. Body Fat Measurement: Following completion of the study, body fat content for each rat was determined using an EchoMRI-900 Quantitative Magnetic Resonance Body Composition Analyzer (Echo Medical Systems, LLC). Blood glucose was measured following a 6-hour fast. The fast was started in the morning at the onset of the 12h lights-on period of the light:dark cycle.

Primary vs. derivative data: The primary data consist of a recording of feeding behavior for individual subjects collected over the course of the experiment in a spreadsheet XLSX format. The derivative folder contains the transformed primary data located in the primary folder. The data consist of summative feeding data in a multiworkbook spreadsheet and the endpoint measurement of body fat and blood glucose levels. Thumbnail graphs of the transformed data are included. As back mount failure occurred starting six to eight weeks post-surgery, only the data from experimental weeks completed (i.e., the full seven days) prior to failure was used in the derivative excel files and companion thumbnails.