Immunohistochemistry revealed the morphology and distribution of nociceptor Substance P-immunoreactive (SP-IR) axons and terminals in the muscular layers (longitudinal muscle, myenteric plexus, and circular muscle) of the mouse stomach. 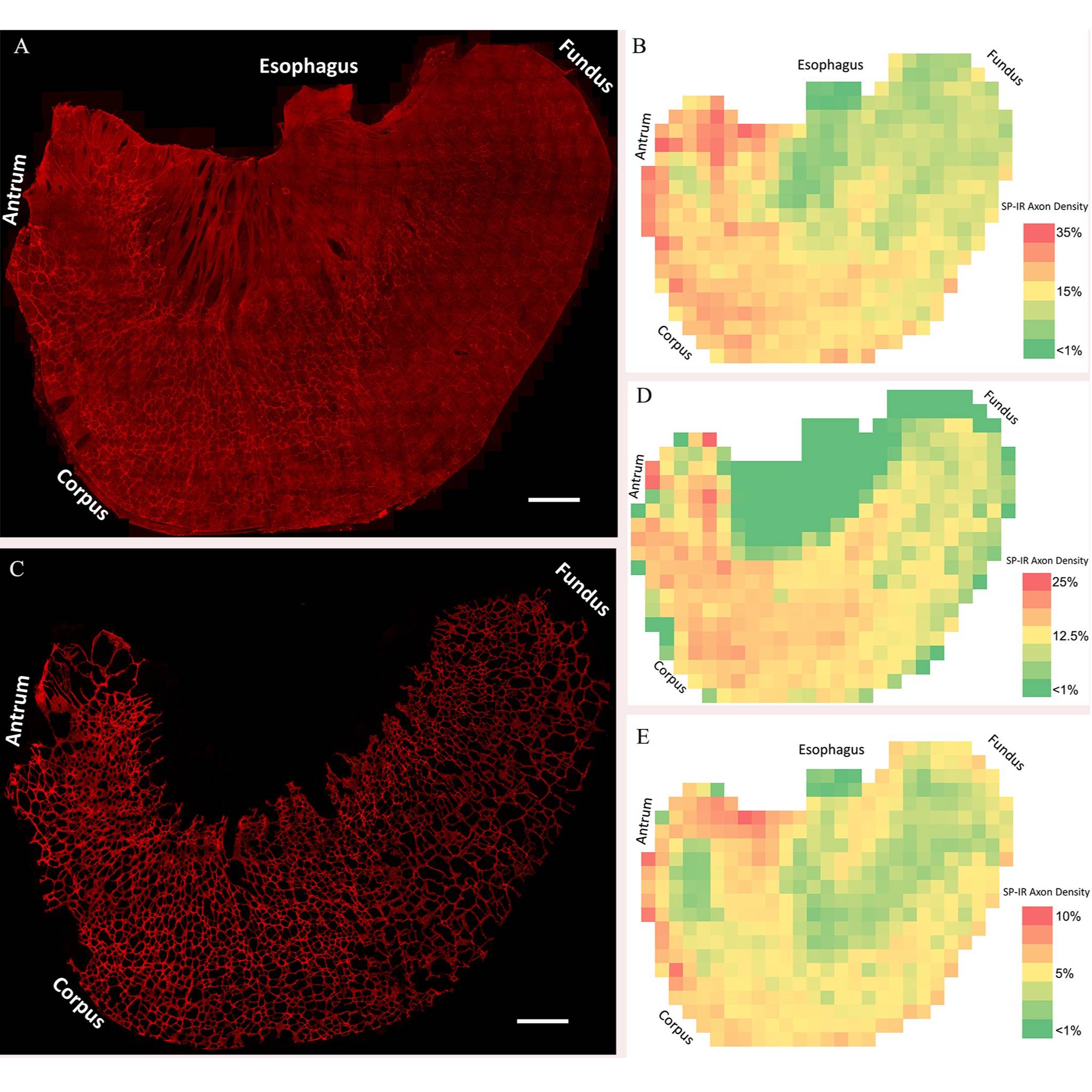 Study Purpose: Nociceptive afferents innervate the stomach and send signals centrally to the brain and locally to stomach tissues. Nociceptive afferents can be detected with a variety of different markers. In particular, substance P (SP) is a neuropeptide and it is one of the most commonly used markers for nociceptive nerves in the somatic and visceral organs. However, the topographical distribution and morphological structure of SP-Immunoreactive (SP-IR) axons and terminals in the whole stomach have not yet been fully determined. In this study, we labeled SP-IR axons and terminals in flat-mounts of the ventral and dorsal halves of the stomach of mice. Flat-mount stomachs including the longitudinal and circular muscular layers and the myenteric ganglionic plexus were processed with SP primary antibody followed by fluorescent secondary antibody, and then scanned using confocal microscopy. Collectively, our data provide for the first time a map for the distribution and morphology of SP-IR axons and terminals in the whole stomach with single cell/axon/synapse resolution. This work will establish an anatomical foundation for functional mapping of the SP-IR axon innervation of the stomach and its pathological remodeling in gastrointestinal diseases.

Primary Conclusion: We found that: 1) SP-IR axons and terminals formed an extensive network of fibers in the muscular layers and within ganglia of the myenteric plexus of the whole stomach. 2) Many axons that ran in parallel with the long axes of the longitudinal and circular muscles were immuno-reactive for the vesicular acetylcholine transporter (VAChT). 3) SP-IR axons formed very dense terminal varicosities encircling individual neurons in the myenteric plexus; Many of these were VAChT immunoreactive. 4) The regional density of SP-IR axons and terminals in the external muscle and myenteric plexus varied with the following order from high to low: antrum-pylorus, corpus, fundus, and cardia. 5) In only the longitudinal and circular muscles, the regional density of SP-IR axon innervation from high to low is: antrum-pylorus, corpus, cardia, and fundus. 6) The innervation patterns of SP-IR axons and terminals in the ventral and dorsal stomach were comparable.

Experimental Design: Animals were euthanized with a lethal dose of sodium phenobarbital then perfused with at least 150 mL 40 °C phosphate-buffered saline via a blunt 18-ga needle inserted into the left ventricle, and blood was drained by cutting the inferior vena cava. The perfusion solution was switched to 150 mL of ice-cold Zamboni’s fixative (15% picric acid, 2% paraformaldehyde in PBS, pH = 7.4) to fix the tissue. After the perfusion, stomachs were removed from the abdominal cavities, layers of the organ were separated and immunohistochemistry was performed on whole mounts with Substance P antibody (RRID:AB_297089), then scanned using confocal and/or Zeiss microscopes. The stomach was reconstructed into a 2D maximum projection image and was evaluated for the density of SP-IR axons. This analysis method was performed on the stomach as a whole as well as on separated layers (myenteric plexus, circular and longitudinal muscles).

Completeness: This dataset is a part of a larger study: Topographical Organization and Morphology of Substance P (SP)-IR axons in the Whole Stomach of Mice.