Evaluating spheres of influence for efferent neural control of the heart

Evaluating spheres of influence for efferent neural control of the heart In a minipig model, sequential knockdown of cardiac ganglionated plexi (GPs) was performed to cause loss of function. 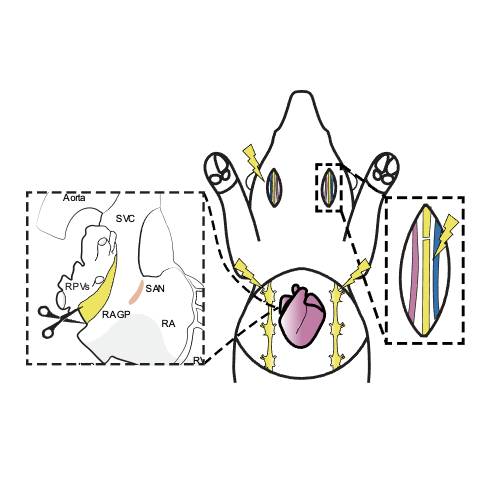 Study Purpose: To evaluate spheres of influence for efferent neural control of the heart.

Data Collection: This dataset includes cardiac electrophysiologic and hemodynamic data with autonomic stimulation before and after two sets of sequential ablations of GPs were performed.

Completeness: This dataset is a part of a larger study: "Innervation and neuronal control of the mammalian sinoatrial node."

Primary vs derivative data: Primary data is organized in folders by the subject ID and the type of performance. Each performance subfolder contains hemodynamics or cardiac electrophysiology data collected in Spike2 (.txt files) and using the GE CardioLab system (.txt files). There is no derivative data folder.