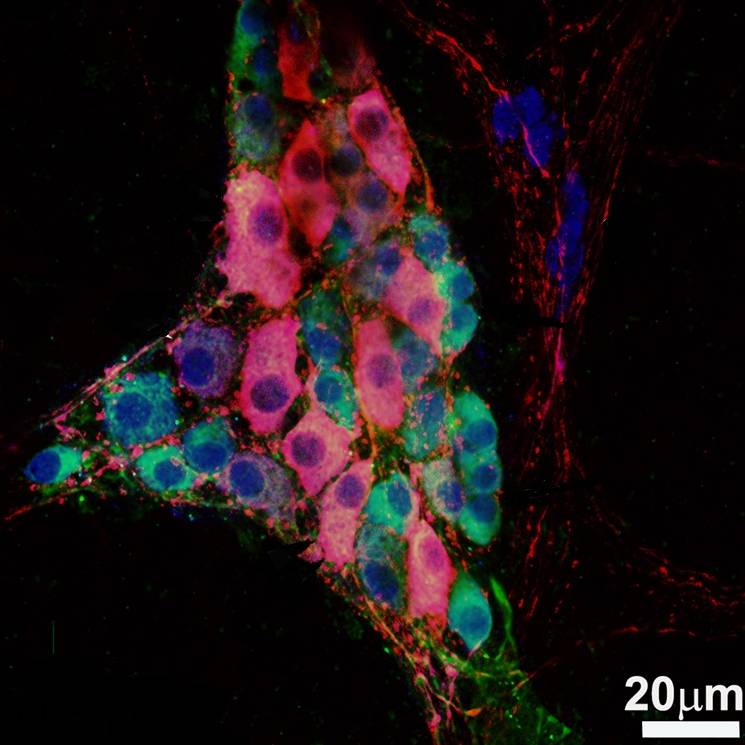 Experimental Design: Specimens were obtained from 12 hour-fasted Yucatan minipigs (average weight 25-30 Kg of body weight, 15 male, castrated). These animals were first used for colonic motility analysis with manometry probes apposed on the serosa, then tissues were collected 10-20 cm distally 5 hours post-induction of anesthesia. The ascending colon (AC) in correspondence to the central flexure and descending colon (DC) (about 30 cm from the anus) were collected. Wholemount preparations of the myenteric plexus (MP) were obtained by separating the longitudinal muscle layer with attached MP from the submucosa and mucosa using a dissecting microscope. The mucosa was removed from the submucosa and the submucosal layer was separated into the inner (ISP) and outer (OSP) parts of the submucosal plexus. Following the immunostaining protocol, specimens were examined using Zeiss LSM 880 Fast-Airyscan confocal microscope (RRID:SCR_020925) and the Imaris software (Imaris for Neuroscientists, RRID:SCR_007370) for quantification. The total number of neurons in each plexus and the distribution of subclasses of neurons, HuC/D, ChAT, and nNOS positive neurons were counted.

Completeness: This dataset is a part of a larger study pertaining to nerve stimulation on colonic motility in Yucatan minipigs.

Primary vs derivative data: Primary data is organized by the subject ID into the sample and then particular imaging session subfolders. Each imaging folder contains source microscopy images in .CZI format. Derivative folder contains tabularized quantification of immunoreactive neurons expressed as a number of neurons per square mm summarized for all taken images. Image data (JPEG2000 and OME-TIFF) was derived from primary images (.CZI) and is organized by subject ID. CZI images were converted with lossless compression to JPEG2000 (.jp2) and OME-TIFF (.tif) by MBF Bioscience for web streaming and visualization on the SPARC Data Portal.