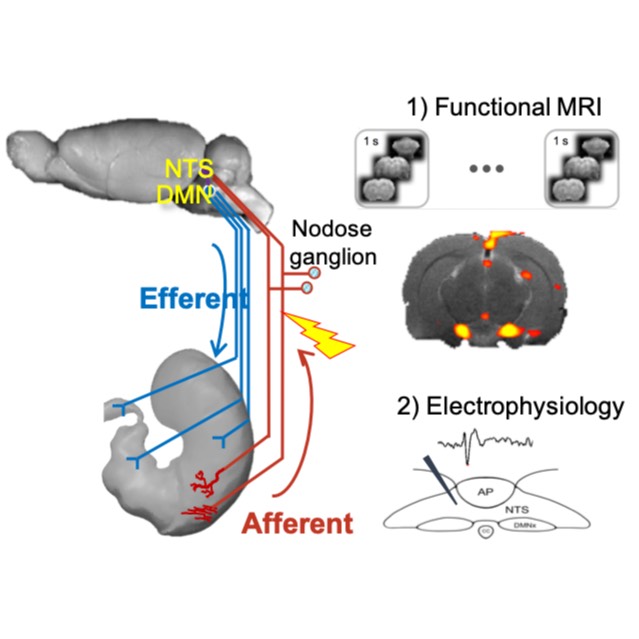 Study Purpose: This study aims to evaluate the effects of GES on neural activity in rats and to examine the role of the vagus nerve in gastric electrical stimulation, GES, evoked neural activity.

Data Collection: Briefly, functional Magnetic Resonance Imaging (fMRI) was performed to access the whole brain neural activity. The stimulation was delivered during the imaging acquisition. This imaging session was repeated multiple times for each animal to achieve better results.

Experimental Design: Ten rats were included in this dataset. Four experiments were performed. In the first study, brain response to low dose GES (current=0.6mA, pulse width=0.2ms, frequency=5Hz), which followed a 20s-ON-40s-OFF stimulation pattern was tested. In the second study, researchers switched to high dose GES (current=6mA, pulse width=0.3ms, frequency=20Hz) which followed a 2s-ON-3s-OFF stimulation pattern. In the third and fourth studies, researchers performed bilateral cervical vagotomy for each animal and repeated the simulation described in the first and second study, respectively. For each animal, fMRI data was stored as NIfTI files, and the stimulation information was stored as mat files.

Completeness: This dataset is a part of a larger study.

Primary vs derivative data: The primary data folder contains raw data recording of functional Magnetic Resonance Imaging (fMRI) for each animal. The fMRI data is organized by the animal ID and is stored in NIfTI files inside "perf-" folders for each imaging session, while the stimulation information is stored as mat files. The size of the primary data is approximately 25 GB. Derivative data is similairy organized and contains preprocessed MRI data in G2 compressed NIfTI format for each animal inside animal ID and imaging session folders respectively.