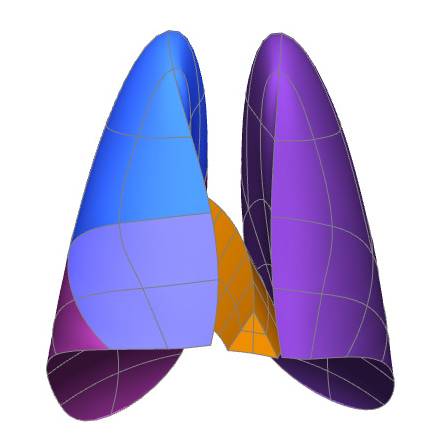 Study Purpose: The goal of this work is to create an annotated generic rat lung scaffold for the registration of segmented data obtained by experimental groups.

Data Collection: An anatomically-based 3D scaffold of the lungs is created to visualise various data (such as neural network, blood vessel and ventilation) on a 3D structure of the lungs. The lung scaffold was independently designed for the human, mouse and rat based on their anatomical structures of the lungs in each species. For instance, a rodent has one lobe in the left lung and an accessory lobe in the right lung, while a human has two lobes (upper and lower lobes) in the left lung and no accessory lobe. Thereby, the lung scaffolds are able to represent and annotate the anatomical structure of the lungs in each species accurately. The lung scaffold is parameterised with the data from the segmentation of CT images (NeuroRat V4.0; DOI: 10.13099/VIP91106-04-0)

Completeness: The study is ongoing and potentially will link to other datasets where the data is used for mapping onto the scaffold.