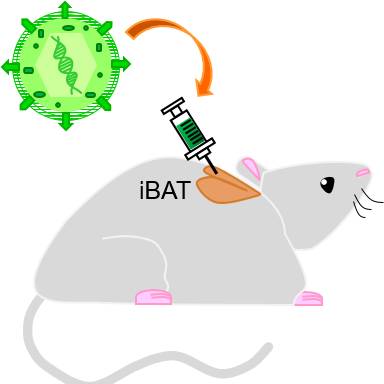 Study purpose: The purpose of its study is to document and analyze the efficiency of retrograde viral transport amongst different viral constructs and mouse models.

The efficiency of retrograde viral transport: a) AAV6 was most efficient for retrograde labeling of postganglionic cell bodies in sympathetic chain ganglia. AdV-cre and CAV2-cre showed substantially less labeling and were not further tested. b) Reporter expression from all viral constructs showed better visibility of RFP compared to EGFP. Cell counts of different virus tracing and reporter constructs available in submission 10. c) Overall viral expression of reporter genes, DREADDs, or ChR2 was unsatisfactory. However, AAV6-driven cre-expression was sufficient to generate robust expression in floxed-reporter mice (e.g., EGFP-L10 mice), so that following experiments were entirely performed with viral cre-expression and in floxed-animal models (DREADDflox; EGFP-L10flox; see Milestone 9).

Experimental Design: The retrograde viral tracers were injected into the interscapular brown adipose tissue (iBAT) to label the axons that innervate iBAT, which have cell bodies in the sympathetic chain ganglia (SChG). After euthanasia, the peritoneal cavity is eviscerated to reveal the SChG. A stereomicroscope is used to visually confirm the extent of viral labeling within the chain ganglia. After, the samples are trimmed to only include the SChG and spinal column. Then, the iDISCO technique was performed in order to capture high-resolution images of the SChG and relevant structures via light-sheet microscopy. Finally, the images generated are used to perform cell counting on individual SChG cell bodies.

Completeness: This dataset is a part of a larger study: "Genetically-based neuro-modulation of adipose tissue functions".

Primary vs. Derivative: Derivative data is organized as a set of excel files where summative cell counts of virally-labeled sympathetic chain ganglia cells are presented for all animals used in the study. Subject names are shown internally in the table. There is no primary data.