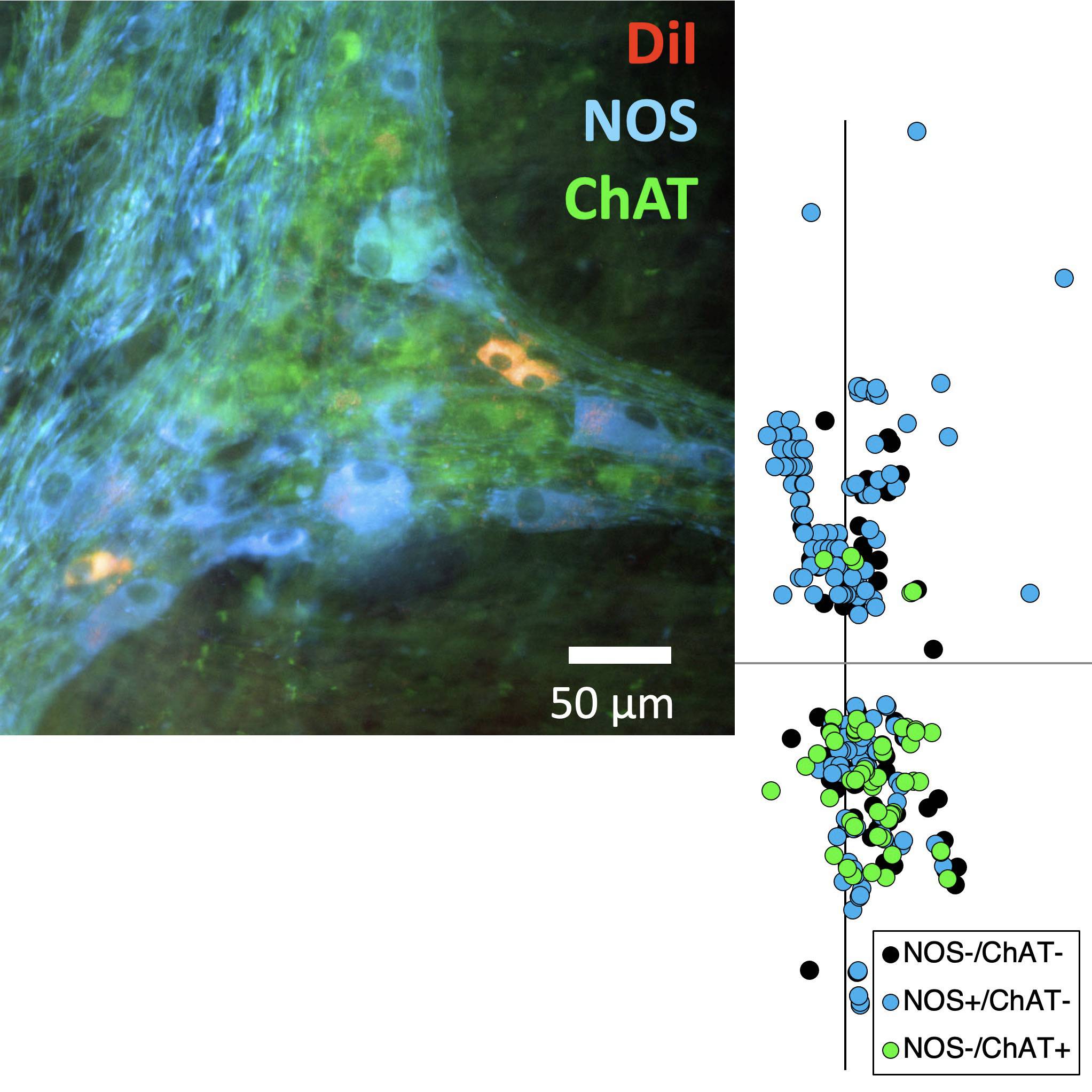 Experimental Design: Tissue was obtained from 34 patients undergoing elective surgery with prior written informed consent. The serosa was then dissected to remove connective tissue, and the preparation was washed repeatedly in sterile KREBS solution. For fills from the tenia, a small longitudinal incision was made between bundles of tenial muscle, and the DiI‐coated bead was placed within this slit, allowing contact with axons at multiple levels through the tenia. In order to enhance immunoreactivity for peptides in nerve cell bodies, preparations to be subsequently stained for VIP immunoreactivity were exposed to 83 μmol/L colchicine for the final 24 hours of the culture period. Antibody-stained preparations were viewed on an Olympus IX microscope fit with epifluorescence and appropriate filter sets (Chroma Corporation). Images of labeled neural structures were captured via a CoolSNAP ES digital camera (Roper Scientific, Photometrics) using analySIS 5.0 software (Soft Imaging System). Scanning to identify DiI‐filled nerve cell bodies was carried out with a 10× objective, and cells were photographed with 10‐40× objectives.

Completeness: This dataset is a part of a larger study: "Characterisation of human colon longitudinal muscle motor neurons"

Primary vs derivative data: The primary folder consists of original raw data files showing results of tracing enteric neuronal pathways in the human colon, ex vivo, using the carbocyanine dye DiI in combination with dual-labeling immunohistochemistry. Each specific folder includes data from a de-identified patient (sub-) with DiI applied to the circular muscle samples. This was combined with immunohistochemistry for choline acetyltransferase (ChAT) and nitric oxide synthase (NOS). Each sample folder contains also a Microsoft Excel file (.xlsx) with coordinates downloaded from a fluorescence microscope. Visual observations of immunochemical labeled preparations of the human colon from all subjects are summarized in one excel spreadsheet in the pool folder. Image data (JPEG2000 and OME-TIFF) was derived from primary images (.tif). Each pair of images were merged into multichannel channel images derived from gray-scale TIFs for each channel (either DiI, NOS, and ChAT or DiI, NOS, and VIP). Even though each converted image names only include _ChAT, the converted images are multichannel channel images. Tif images were converted with 20:1 compression to JPEG2000 (.jp2) by MBF Bioscience for web streaming and visualization on the SPARC Data Portal. Tif images were also converted with lossless compression to OME-TIFF (.tif) by MBF Bioscience.